For instance, I’d lay back in bed, turn on some slow jams, shut my eyes and imagine some swarthy lumberjack, poised to ravage me.

“Take me, take me now!” I’d cry to my romantic partner.

Stone cold freaking would begin. After a few seconds, he would stop, and say “wait. hold on. There’s something digging into my leg. Holy shit, is this a toenail?”

Even my homosexual cats, Henry and Ralph, were getting more play than me in my bedroom. Unlike human homos, they didn’t seem to care if I had a box of tampons on the desk or not. They didn’t mind about the broken christmas lights. They got it on day and night.

“Jesus christ, give it a rest!” I’d shout, in the middle of the night, feeling the bed wobble, and hearing what sounded like the ghost of eartha kitt rumbling up from the bedsheets. “Go rent a room at a Hojo and leave me in peace.”

As the days led up to my Big 35th birthday Bedroom Makeover, I grew increasingly excited, envisioning how my new bedroom would look. One thing I did know for sure–I’d be caught dead before I let anyone turn it into some assembly-line pottery barn suburban bullshit. There would be no earth tones, and no motherfucking shams. There would be no framed artwork featuring spring flowers, or abstract squares. And there would definitely be no wicker baskets, of any shape or kind.

“Hey, maybe we can even put a mirror on my ceiling!” I said, to Adriana, in a reverie of excitement, one night.

“Honky, you live on a fault line–ain’t no way I’m gonna let you get sliced to shit from your falling fuck mirror if there’s an earthquake.”

“Don’t worry! We’ll make it sexy. Just watch–it’ll be like a dick trap. Men will be walking down the street and suddenly be knocking on your door with their boners.

I smiled, thinking about some of the hot DILFS in Rockridge, abandoning their non-fat latte pilates wives, and strollers, for one chance to freak out in my den of iniquity.

We had meetings to discuss paint colors. We collected swatches. We debated over accent walls, or a full bedroom paint job. In the end, we decided to do two accent walls. The color I chose was a deep, fully engorged burgundy called “Wild Raisin”. 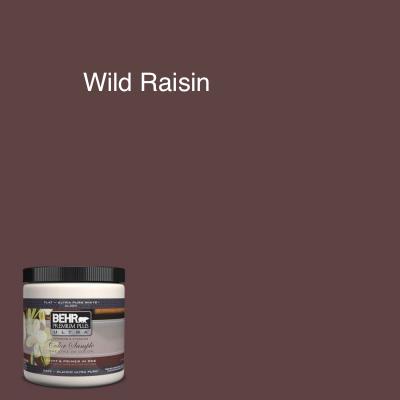 I spent the morning of my 35th birthday emptying my aquarium, moving my dresser, and desk out of my room, preparing for Adriana and Julie to arrive with their cleaning supplies. Behind each of these things were assorted treasures! Buttons, and safety pins. Earplugs, and hairballs. Dried cat vomit residue, and cat litter. And about $50.00 worth of spare change.

The last thing that remained to be cleared out, was my mattresses.

I’m not sure how often y’all clean behind or under your beds, but the only times I’d ever cleaned behind my bed , was when I was actually moving out of an apartment. That is to say, my idea of a fun Saturday afternoon involves hanging out at the cemetery and thinking about death, and coming home to listen to 70’s music while I dance with a towel on my head. Maybe make a casserole, or two. Maybe start a screenplay I’ll never finish. But never have I ONCE said “you know…I think I’ll spend this nice golden saturday afternoon cleaning behind my bed, because it seems like it might be getting a little grody back there, and I don’t want to breathe in spider poop while I sleep.”

Never. I’d lived in that room for 5 years, and never once moved or cleaned behind the bed.

I had no idea what I was in store for.

After the spiders and silverfish were effectively wrangled and exterminated, and I stopped shrieking about bugs, I began to slowly fish out random items from behind my mattress, each one more strange than the last.

Then, I began to snap some photos. 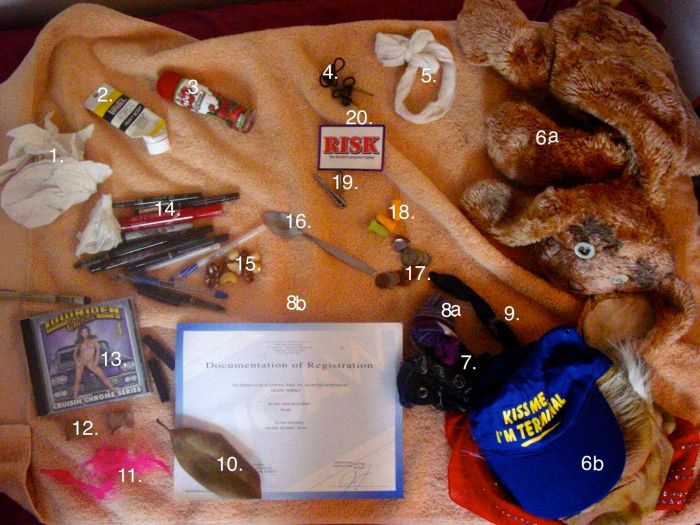 List of items found behind my bed, are as follows:

After taking several artistic photos of what I found behind my bed, I moved my mattresses out of my room.

My bedroom was now COMPLETELY EMPTY. Having all of the furniture of of my room gave me brand new insights into the random stains on the wall. Some of them were obviously coffee or condiments. Some were more mysterious, and contained particulate matter of unknown origins.

The doorbell rang. It was my friends.

“Happy birthday, honky!” they shouted, hugging me, and dragging buckets and mops and rags behind them.

“I’m proud to announce, I removed all of the furniture from my room,” I announced, walking them into my bedroom. “Incidentally, I found some nuts behind my bed. Is anyone hungry?”

“Jesus. We’ve really got our work cut out for us,” said Julie, gazing at the Jackson Pollock splattered walls, and crusty floors.

“Dang. I really hope those aren’t boogers on the wall over there,” said Adriana.

“Yeah. We may need something stronger than Murphy’s soap for this job,” remarked Julie.

“We can always go get bleach if we need to. And we may need to,” said Adriana.

“Well, should we get started?” I asked.

As my friends began to fill buckets full of soapy, lemony-scented water, I grabbed my camera and started snapping more photos. I knew this would be a day that would live in infamy, and it was.

One thought on “The Monsters Behind My Bed”