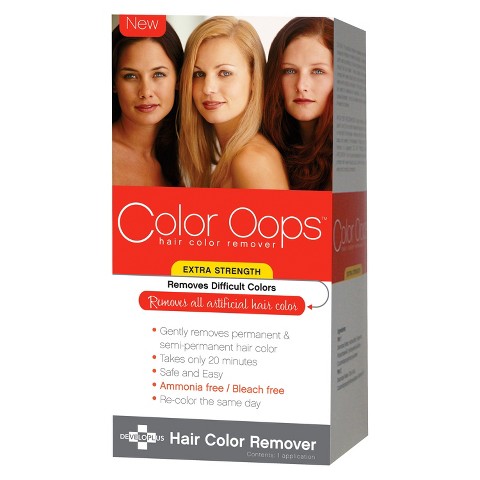 I’m writing to you because, after 23 washings, my hair STILL smells like Color Oops Hair Dye Remover, which, as you may or may not know, is the exact smell of hospital room death.

I don’t know why I wanted to turn my golden locks brown, two weeks ago. However, I suspect it may have something to do with the fact that I’m now 3 months shy of turning 40. Being always youthful and sprightly, I never expected that I too would fall prey to a midlife crisis, of any kind. But apparently I have.  For instance: 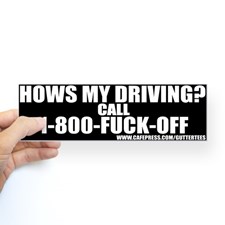 All poetics aside, the processing time on the brown dye said 30 minutes, but my practical friend warned me to check periodically because my hair is so light it will literally drink up dye like it’s just fallen off the wagon.

Check. After 5 minutes, I noticed my hair turning REALLY SUPER BROWN. I immediately washed out the dye. The day before, I’d gotten a shorter, shaggier cut. Ever the optimist,  I imagined the results would be like Winona Ryder from Reality Bites. 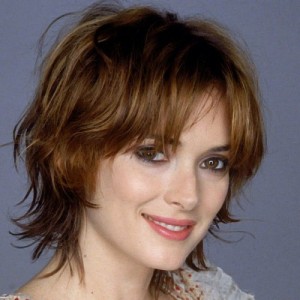 However, it turned out I more closely resembled Carol Burnett, Circa 1974 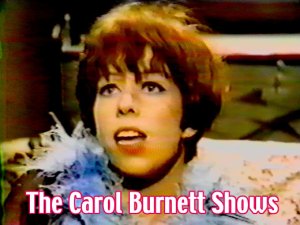 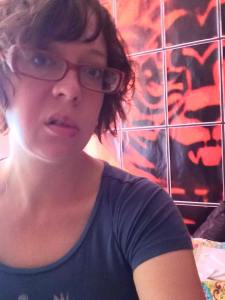 And so, I lived one week as a full on brunette. My coworkers said it looked good on me, and “brought out my eyes” which is, of course, the default compliment people give when there are no nice things to say about an obvious cosmetic accident. (“interesting…. do you like it?” is another one)

Anyway, during my week as a brunette, I felt sadly invisible. No longer did people look at me as an exotic  inbred specimen from some snowy place.  Sure, there are blondes in the bay area, but most of them are fakers with bad roots. My color is true, and it  comes from generations of bluish-white people doing what they do best: breeding with their siblings to stay warm.

A quick google search  for “how do I remove hair dye” led me to Color Oops Hair Dye Remover. Fortunately, the Walgreens by my house carried it! Yes! It promised to strip the brown from my hair and restore the old color. Soon, I’d be back to my old exotic self.

It was gag at first squirt. I won’t lie–I usually enjoy the smell of corrosive chemicals. I like gasoline, bleach, elmers glue, and soft scrub in particular. However, this grouping of chemicals did NOT make me happy or evoke pleasant fantasies of sucking on the nozzle of a gasoline pump in an industrial wasteland. Instead, it evoked the smell of the nursing home I was forced to visit every other weekend for two years when I was a kid, to visit my late uncle (rest in peace) who was institutionalized there.

The nursing home wasn’t called Sunny Acres, Meadowlake Villa, or Convalescent Cove. It was named after the broke-down Minneapolis neighborhood it was located in: Bryn Mawr. Hell, the name even  LOOKS jank–could they really not afford to buy a few vowels?  Apparently not.  And Inside, it looked exactly like a horror movie hospital, and was tended to by nurses who looked like they spent their off hours assembling car parts.   And everywhere, the old people shuffled down the hallways, yelling out, arguing, begging invisible friends for candy, demented, dragging dirty diapers, sometimes half naked,  and nearly all of hem long abandoned by their families. And no matter how much industrial grade ammonia and bleach they hosed the place down with every night, nothing could erase the smell of impending death. It trumped everything.

My late uncle Ken,  who was sadly only in his mid thirties at the time, was placed at Bryn Mawr because he was afflicted with a particularly deadly and crippling form of MS. My grandmother, who lead the charge of our bi monthly family visits, who was, incidentally,  already certified crazy, used this as an opportunity to crank her insanity to  a volume of 11. She’d spend weeks preparing for these nursing home trips…packing food and supplies that were better suited for building a bomb shelter, than visiting a someone in a nursing home-food bars, slipper socks, sweaters, baby food, pudding, instant breakfast.

But that was just a start!  As soon as my dad fired up our bloated Buick Skylark  every other Sunday, we’d still have several more stops to make before seeing Ken. Throughout the week, he’d shout out the names foods that he wanted my grandma to bring him, for his big feast. Fried chicken, steak, burgers, fries, mcdonalds soft serve ice cream…The list was long and punishing, and by the time we arrived at Bryn Mawr my entire family smelled like the grease trap of a deep fryer.

Upon arrival, the  ritual of feeding Ken began. My uncle was always a good eater. Unfortunately, because of the disease,  he no longer had any way of knowing if he was full or not, and would inevitably end up barfing. It was such an ingrained ritual that my grandma KEPT A BARF TROUGH  NEAR HIS BED for the moment when this happened. And it always did. Sometimes he’d barf and then demand more fries. It could go on and on.

Whenever the feeding began, I’d take my little sister Laura downstairs to the community room to spare us both having to watch the barf fest.  Sometimes we’d eat  from the box of sugar cubes that lay next to the tea dispenser. Sometimes we’d plunk out some tunes on the broken piano, pitched pennies, or pestered one of the bedraggled nurses for paper to draw on.    It  was always a little scary to be alone anywhere at Bryn Mawr–especially if you were under 10. This is because all of the residents, so desperate and lonely for company, would always sniff us out and stagger out of their rooms to find us.  One woman would march in place and smack her lips together, ready to gobble down our youthful souls. Another would say “Abba Abba Abba Abba” over and over. One man, afflicted with severe hydrocephalus,  seemed particularly enchanted by my sister, and would roll his blimp head around to stare at her whenever she was near. (Which of course, terrified her).

All of this backstory, of course, is not to torture you, but   to give you a fully developed sense of the smell bouquet evoked by Color Oops Hair-Dye Remover. To recap:  Ammonia, bleach, barf juices, despair, and death. Check.

As I washed the corrosive chemicals out of my hair that first day after application,   I prayed to Jesus that I’d actually have hair left when I got out of the shower. Fortunately I did. And while the chemicals did NOT restore me to my old color, they did lighten the color to a strawberry blonde that looks, if nothing else, like it would grow naturally out of my head. 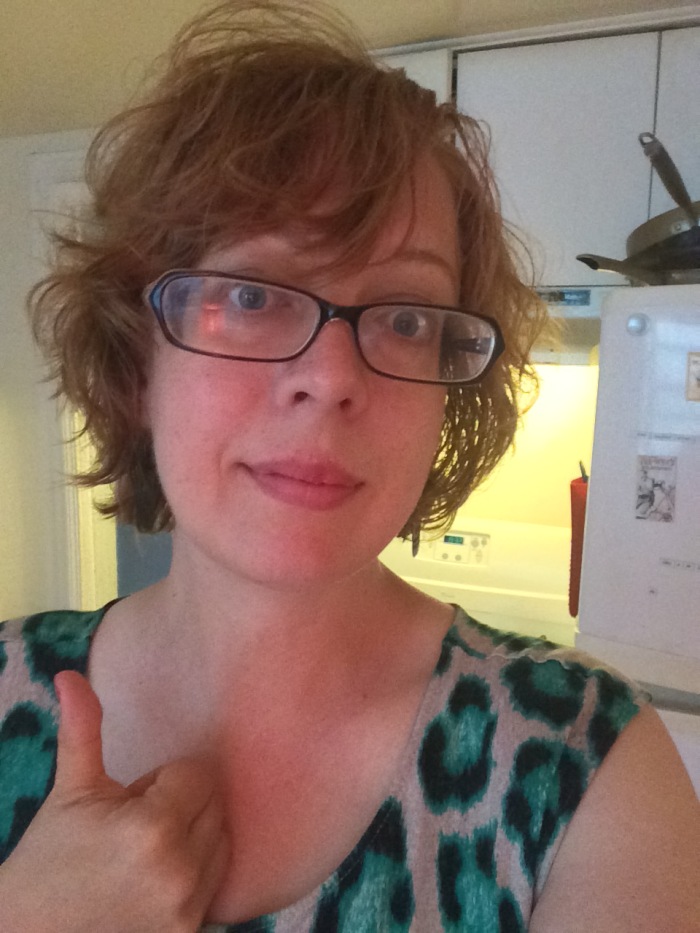 Unfortunately, it was only the beginning of my nightmare. That night, as I brushed my teeth, I caught a whiff of it again. I concluded that I must have spilled some color loops somewhere in my bathroom, and immediately began scrubbing like mad.

A few days later, I was at the gym, and I caught another whiff. What the….It was coming from my sweaty head–apparently I didn’t wash it out well enough!

A few nights later, I woke up from a nightmare, head all sweaty,  and SMELLED IT AGAIN.

BUT THE SMELL WAS STILL THERE.

The good news is, I only smell the smell chemicals when my hair is wet or my head is sweaty. As long as I don’t get too worked up and avoid the rain, all is groovy.

The bad news is, the chemicals are still in my hair follicles. What are they doing in there? Why won’t they leave? Don’t they know their job is done, and they can now  go to the great celestial sewer in the earth and mingle with mouthwash, acne scrub and shampoo residue? Seems like a pretty good deal for some foul smelling

Why am I writing to you? Obviously  my association with the smell of your product is unique to me. Nobody else in the world visited their uncle Ken in a nursing home for two years and watched him barf  a haystack of fries into a trough. Nobody else sat in a hallway pitching pennies for hours while sad old people cackled and peed on the floor.

I guess I’m writing to see if this is a common thing among users of your product. Is it me? Or is this some sort of gift that keeps on giving? In other words….Is the hair dye remover continuing its slow stripping my follicles of browny brown even after 23 washings?

Primarily, I am seeking your sympathy. However, if you are so moved, please reimburse me $12.99 for the entire bottle of shampoo I used up trying to wash the smell out.

Also, since my scalp is sore from all the rubbing of shampoo suds, I would like to request one of those cool scalp massager things that look like beat-up kitchen whisks. Those are awesome as fuck.